A new start is so much more fun than finishing an old project. Winding the yarn, casting on, knitting the first fresh rounds.

And then you end up with something like this: 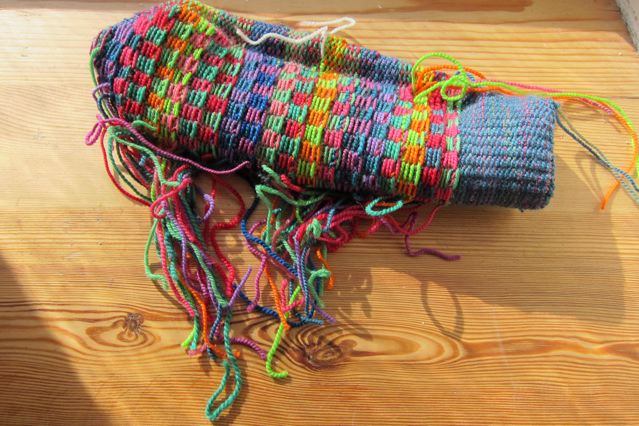 But I have only got myself to blame. What a stupid idea it was to make a pair of mittens out of remnants. Just look at that mess.

To cheer myself up I started a couple of new knitting projects instead. 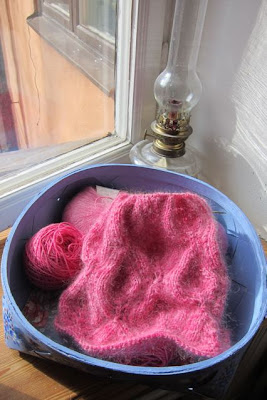 This will eventually become a cowl. I am using a sock yarn combined with Kidsilk Haze, so it is going to be a very cosy cowl. 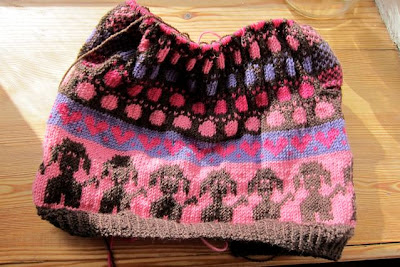 And this is a baby cardigan for my cute niece. It has a pattern of dogs, hearts and paws in brown, pink and purple. It is the dog from the Happy Hound hat – because I am really fond of their melancholy look.

Actually, I should probably not call it the Happy Hound hat. The Melancholic Mongrel hat would be a much more befitting name, wouldn´t it?
Upplagd av Johanne Ländin kl. 13:06 2 kommentarer: 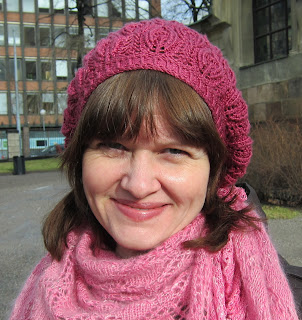 These days I mostly knit my own designs. But sometimes I like to relax and just enjoy someone else´s work. So when I came upon Maria Näslund´s lovely hat Tulipanaros I decided to order some yarn from Sjöalyckans silke and cast on. 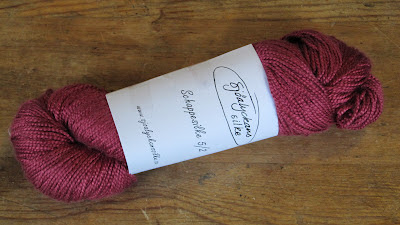 The original hat was made in green that suited the leaf design very well, but I am a sucker for pink and simply couldn´t resist this particular shade (and I didn´t try very hard either to be honest). 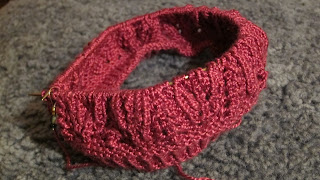 It was such a quick and easy knit. Almost went too fast. I´m so used to having to rip back at least a couple of times – instead it was finished all of a sudden. Isn´t it a beautiful design? Especially from the back. 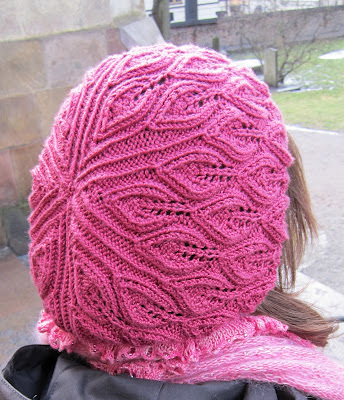 So this morning I decided that spring is here, put my new hat on and took the bike to work. Big mistake. It was freezing and started to snow. But at least it meant that I had the bike lane almost to myself.

The Tulipanaros hat matches my favourite shawl Grace designed by Heléne Wallin to perfection.
How can you not love a shawl that has both beads and ruffles? Heléne is a genius. 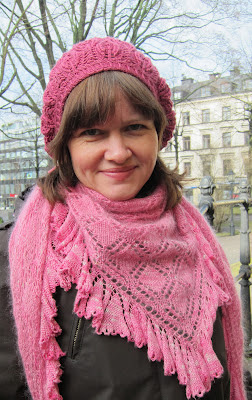 My friend Eva-Karin took this and some of the other photos for this blog post.
Tack för hjälpen, Eva-Karin!
Upplagd av Johanne Ländin kl. 12:16 2 kommentarer:

No, it´s Not Lonely at the Top

Guess where we went for the mid term holiday – that we in Sweden call a sport holiday?
Here is a clue: 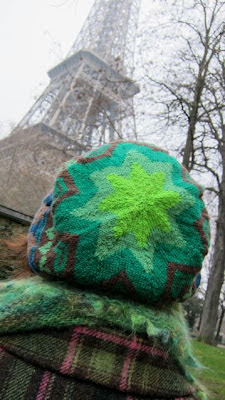 Yes, that is the Eiffel tower and the kids made me walk up the stairs.
668 steps.
But it was walking down the stairs that made me suffer (that´s middle age for you)

And it wasn´t lonely at the top. At all. It was quite crowded actually. Even though we went there pretty early in the morning on a misty day.

The Happy Hound Hat was just finished in time to accompany us to Paris and we took the opportunity to have a photo shoot. 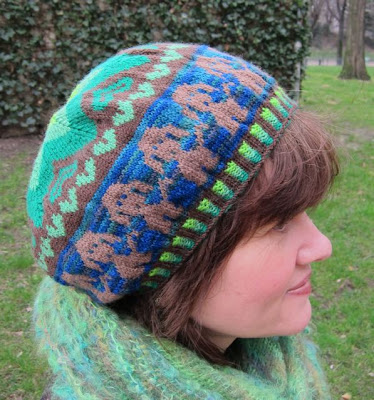 It is a much better fit now and I love the colours.

In Paris we stayed in an apartment on Rive Gauche, a lovely neighbourhood close to the river Seine. 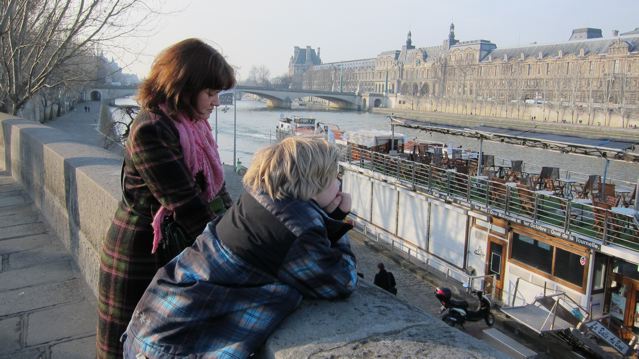 Just across the bridge was the Louvre and of course we went there to have a look at the Mona Lisa. About 10 000 Japanese tourist had had the same idea. Quite a coincidence, eh? 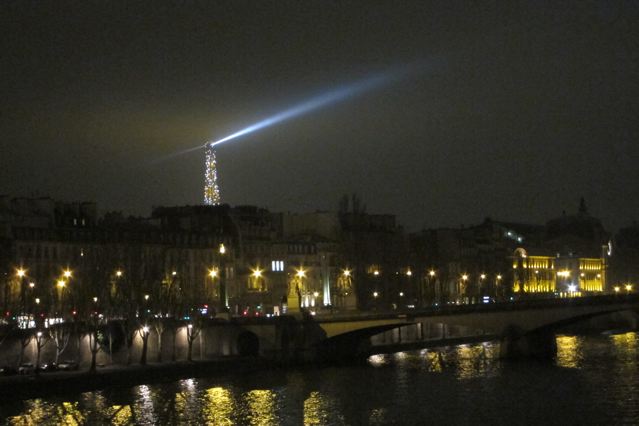 We also went there one evening to have a look at the Eiffel tower by night. There was a light show every hour and the lights on the river were pretty spectacular, too. 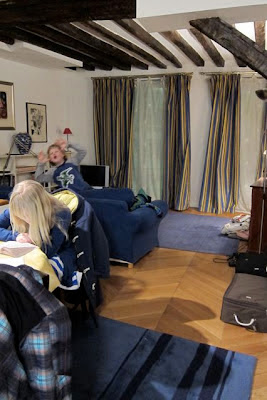 The apartment we stayed in was in an old building with wooden beams in the ceiling. Teenage daughter no longer wants to be in photos – unlike her younger brother...

It was a very beautiful apartment and my favourite room was the bathroom – because of the tiles. 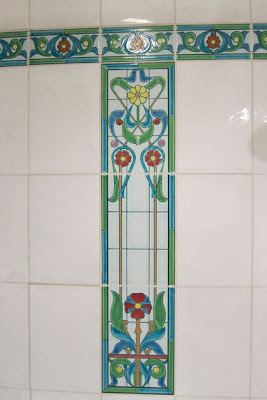 I am beginning to suspect that I have a thing about tiles. But this would make a pretty knit pattern, no?

In central Paris there is a quite famous craft shop called La Drougerie. To me – with very poor French – it sounds as if they have called it ''The Drug shop" and it is a pretty apt name for a shop selling this much yarn. 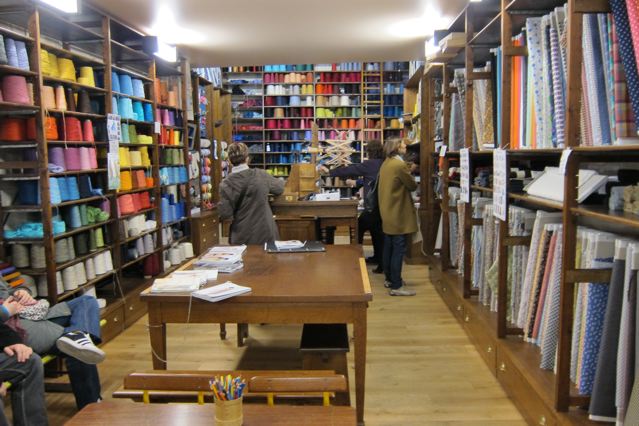 I didn´t actually buy anything at La Drougerie, though. Because I had already spent all my money in a place called L'OisiveThé. And no, I can´t pronounce the name – but luckily I found it (all the way out in a suburb) without having to ask for directions.

It is a combined tea and yarn shop – and what a brilliant idea that was!  Kids can´t talk with their mouths full of chocolate cake, so no complaining about how long mummy is taking choosing colours.
The genius who runs this establishment is called Aimee and being American she speaks both English and French which made shopping a lot less traumatic.

This is me with my loot: two skeins of Madeline Tosh sock and four skeins of Koigu. But I do look as if I have bought something more illegal. (I am supposed to be on some kind of yarn diet but let´s not spoil the mood by talking about that) 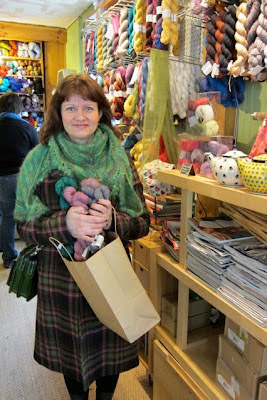 A big thank you to Louise who not only let us borrow the lovely apartment but also tipped me off about this excellent yarn shop!
Upplagd av Johanne Ländin kl. 13:39 6 kommentarer: