Oh Lord, What a House!

The dilemma of being a tourist is that you want to see spectacular things but you don´t want to go where all the other tourists go, right?

Now, in London there is a rather spectacular little museum that is not very well known. At least not compared to Buckingham Palace or Madame Tussaud´s anyway.

It´s the house of a lord who was one of Queen Victoria´s favourite painters in the 19th century. It´s called the Leighton House Museum and is situated in Holland Park. Surprisingly close to all the tourist hotels but still something of a secret (maybe the British want it all to themselves). 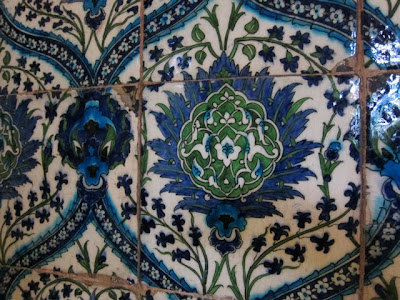 When you enter the hall you get the feeling that Lord Leighton really really liked tiles. I have to admit that I have a thing for tiles myself, but not quite to this extent. The hall was tiled from ceiling to floor and it was an amazing sight. Hundreds of 16th and 17th century tiles from Syria.

But it can be a shocking experience if you are only used to white walls and blond Scandinavian furniture... 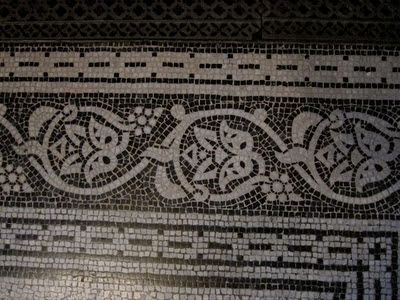 The floor was also decorated with tiles – that might be transformed into a lovely knitting pattern.

On the top floor was Lord Leighton´s studio where he painted. Big windows let in the light that made it the perfect place to paint. But there was also the most beautiful stained glass windows. 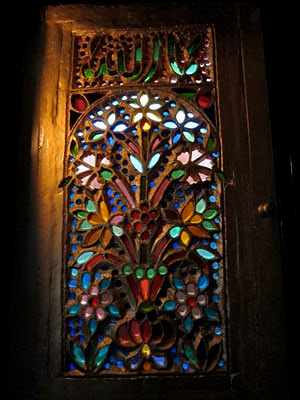 I have to confess that you were not allowed to take photos in the museum, but I simply couldn´t resist. Before we went on holiday I had treated myself to a new compact camera (a  Canon S95) – and it´s brilliant for taking pictures indoors in poor light. You don´t have to use a flash that would alert the staff who would come and tell you to put the camera away.

And I hope we have a deal here: I show you all these pretty photos and you come and visit me in prison if I get found out and have to go to jail?

Lord Leighton was also a collector of china plates and displayed them on the walls. 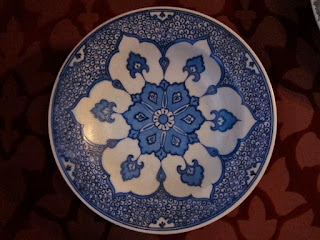 And when I saw this plate it reminded me of something else. 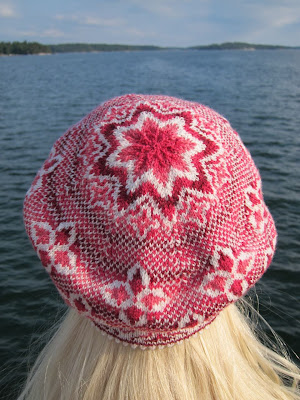 My Märta hat – that I made that before I saw the plate.

Even the ceilings in Lord Leighton´s house were decorated. More inspiration for a knitwear designer, I dare say. 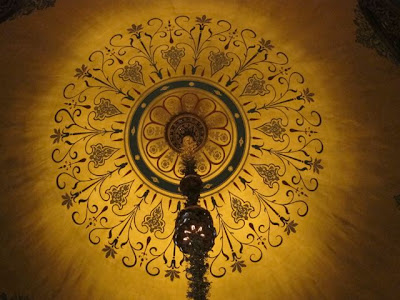 So next time you visit London make sure you take the time to visit Lord Leighton´s house.

But don´t tell anyone else – we don´t want the place crawling with irritating tourists now, do we?
Upplagd av Johanne Ländin kl. 14:02 3 kommentarer:

We spent our summer holiday in London – during the riots in August. We were lucky to stay in a suburb where we didn´t have to fear the mobs roaming the streets.

But the yarn shop Loop is situated in Islington – where the Tottenham uproar spilled over. A number of shops had to close early on the Monday, but on Wednesday the same week I thought it seemed calm enough to mosey on over. 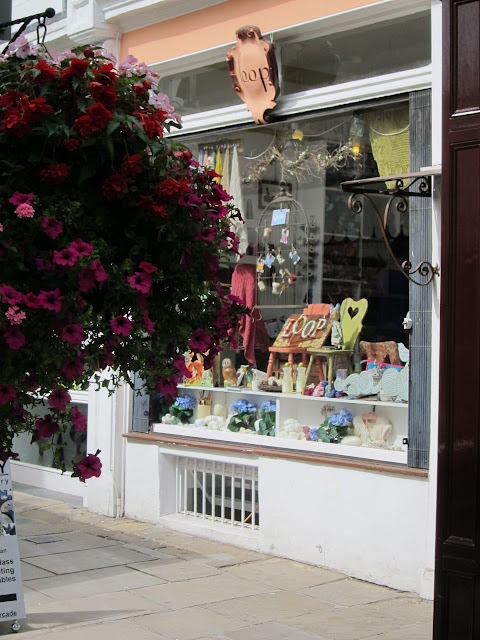 Of course the riots was the talk of the town. But by this time – when I visited Loop – the streets of London were crawling with extra  policemen that had been called in from the rest of England. So I didn´t feel so very scared. Even if my heart jumped every time I heard a police siren. 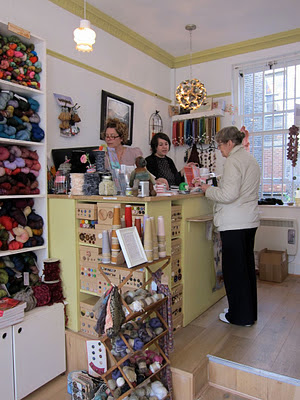 Once inside the shop it was clear that the trip over to Islington had been well worth it. This is the ground floor with all the yarn. On the upper floor there was even more yarn and a big bookcase filled with books about knitting.

But I walked away with some skeins of Madeline Tosh sock yarn – and Wollmeise! 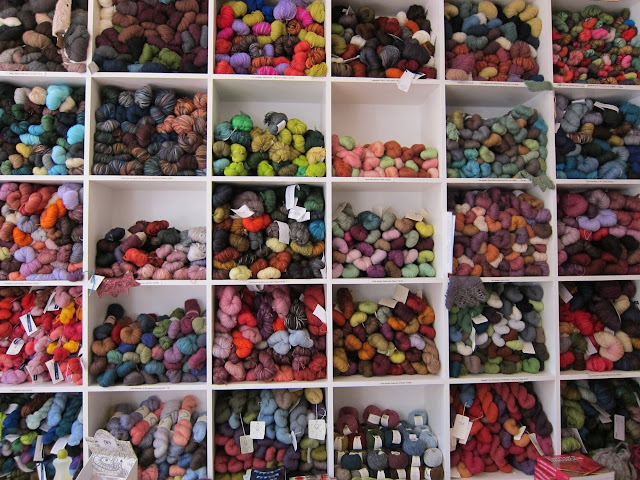 Yes, there was a big bundle of Wollmeise lace yarn in a deep red just waiting there for me. Last one it was, too. I think the sight of it made my heart jump more than the sirens of the police cars.

While in London I did come up with a new hat design and decided to name it Victoria – in honour of the Victoria & Albert museum that is such a rich source of inspiration.
We decided to take some photos that would sort of hint where we had been. 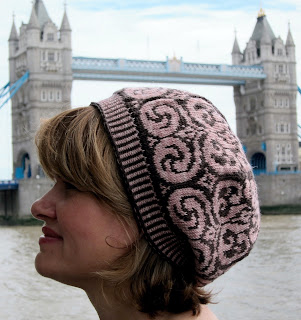 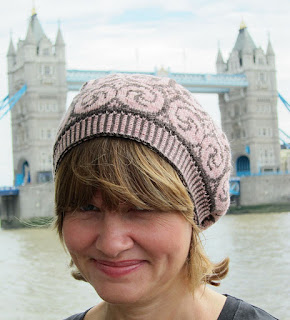 It certainly was an exciting and eventful holiday. But next summer I think we will avoid London the best we can and watch the Olympic Games from the safety of the sofa in our living room.
Besides it´s so much easier to knit in front of the television.
Upplagd av Johanne Ländin kl. 14:53 2 kommentarer:

The Best Thing About Syfestivalen

Last weekend I was at Syfestivalen, the Handcraft Fair in Stockholm and preached about knitting gave work shops. 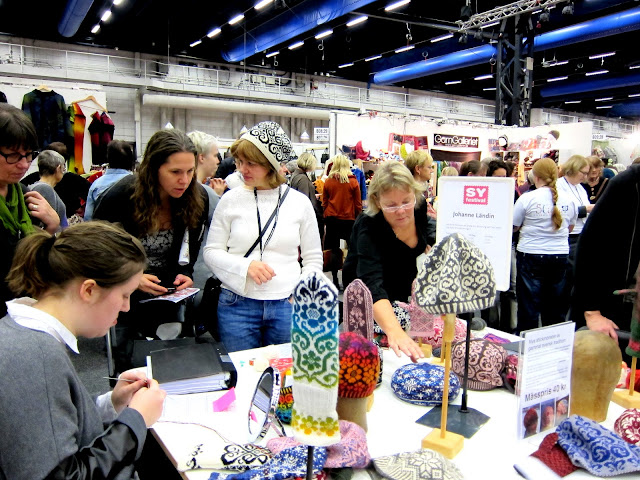 I think I might have said it before but the best thing about giving work shops at Syfestivalen is to be able to drone on and on about knitting – and yet no one you talk to get that glazed look in their eyes and start searching for ways to escape.

Instead people lean in closer in order to hear better. Ladies having fun can be pretty loud and I´m still pretty hoarse after trying to make myself heard above the crowd. It was busier than ever. But I really enjoyed meeting old friends and making nice new acquaintancies.

Last year I talked about how to make your own knitting patterns. This time I shared my best knitting tips – like using circular needles for knitting everything. 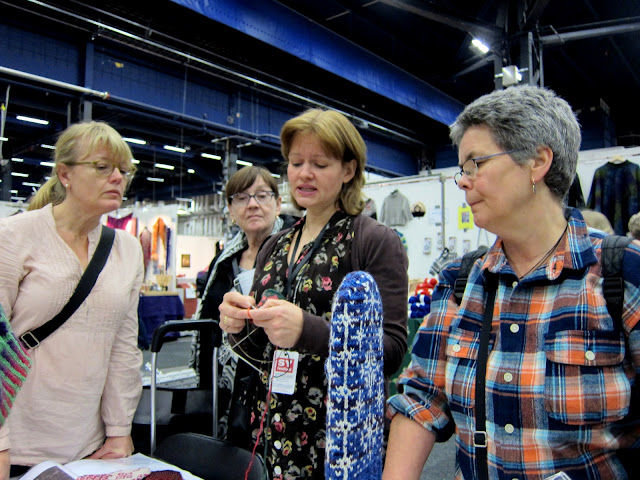 Here I am demonstrating how to use two circular needles instead of five dpns and I do take my mission seriously.

People could sit down and try knitting with two colours. 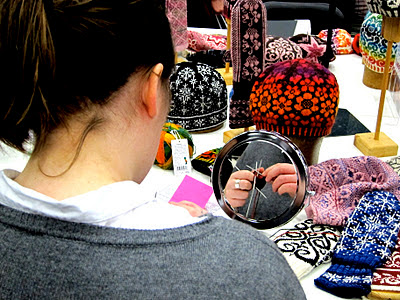 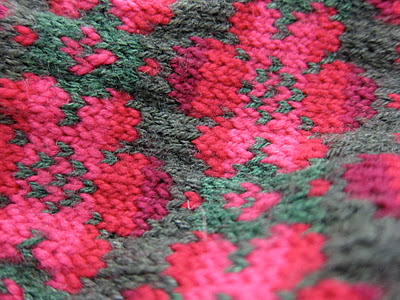 I had a helper –  my daughter Elise. While I was busy talking and knitting she took the opportunity to play with my camera. This is a close up of my Britta hat – one of the most popular designs at the fair. 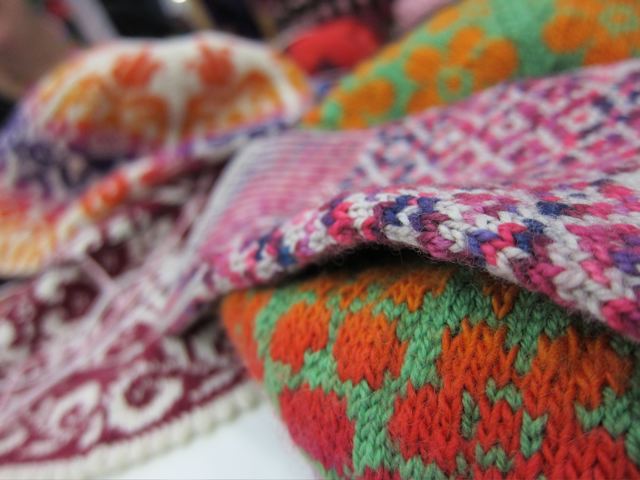 Frequently asked questions were did you really make all these? and are these machine knits?
The answers are yes and no. 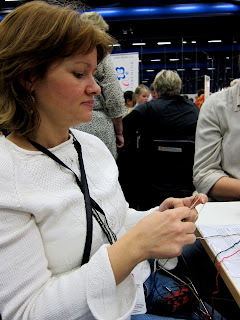